After many years of requests for a place to honor members and their loved ones who have died, we have created a Memorial Walkway in the heart of the Fellowship. Individual names and lifespan dates are engraved on plaques or tiles incorporated into murals on the walls along the walkway.

These words, from the book When Clay Sings by Byrd Baylor which introduces children to Native American culture and art through their pottery, begins on the first wall and continues on the next, ending along a stream of handmade bricks created by individual Fellowship members:

They say that every piece of clay is a piece of someone’s life.
They even say it has its own small voice and sings in its own way.
So listen for whatever voice the clay may have –
A windy voice? A sandy voice? A voice like a far bird’s cry? 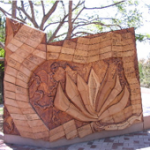 Dedicated May 2010, the first mural “AGAVE” echoes the healing values of Truth, Reason, Justice, Love, Peace, Honor, and Virtue, which are featured on the retaining wall surrounding the Fellowship Core Area.

Dedicated June 2014, the third mural, “LOTUS,” with its strong stem symbolizes the unbreakable bonds of human and family love. 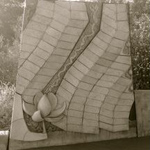 The fourth mural, installed in 2019, is clay artist Jerry Thiebolt’s latest addition, and illustrates the theme of CHALICE AND SUN.

When the fifth and final mural, TREE OF LIFE, is complete and installed, the total number of memorial titles will reach 500, which should serve the Fellowship’s needs into the second century.

Information on eligibility and minimum donations for reserving a plaque are available: