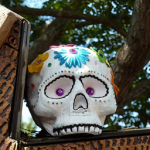 We share the traditions of this ancient Mexican holiday which celebrates life by embracing the truth of death and inviting spirits back to earth for a party. Members and visitors are invited to participate in this interactive celebratory service by bringing momentos, thoughts, pictures, and/or favorite items of a dead friend or loved one whose life you wish to celebrate. We have a communal altar/ofrenda, and a chance to light a candle and share a brief remembrance. 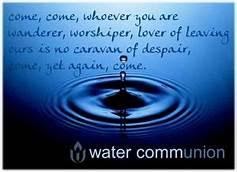 The Water Communion, also sometimes called Water Ceremony, was first used at a Unitarian Universalist (UU) worship service in the 1980s. Members bring to the service a small amount of water from a place that is special to them. During the appointed time in the service, people one by one pour their water together into a large bowl. As the water is added, the person who brought it tells why this water is special to them. The combined water is symbolic of our shared faith coming from many different sources. It is often then blessed by the congregation, and sometimes is later boiled and used as the congregation’s “holy water” in child dedication ceremonies and similar events.

Twice per year, in December and June, the worship service is entirely focused around a musical worship. These Music Sundays feature the UUFSD Choir and often community soloists and instrumentalists are included. Two half-day workshop retreats are held every year as preparation for the Music Sunday Concerts.

The Flower communion service was created by Norbert Capek (1870-1942), who founded the Unitarian Church in Czechoslovakia. He introduced this special service to that church on June 4, 1923. For some time he had felt the need for some symbolic ritual that would bind people more closely together. The format had to be one that would not alienate any who had forsaken other religious traditions. Capek turned to the native beauty of the countryside for elements of a communion which would be genuine to them. This simple service was the result. The flower communion was brought to the United States in 1940.

The Christmas Eve Service is frequently celebrated in an evening service. It often includes “lessons and carols” and sometimes a story that conveys the spirit of Christmas. At UUFSD, we include a candle-lighting ritual in the service, in which the church lights are dimmed and people pass a flame from candle to candle until everyone is holding a lit candle.