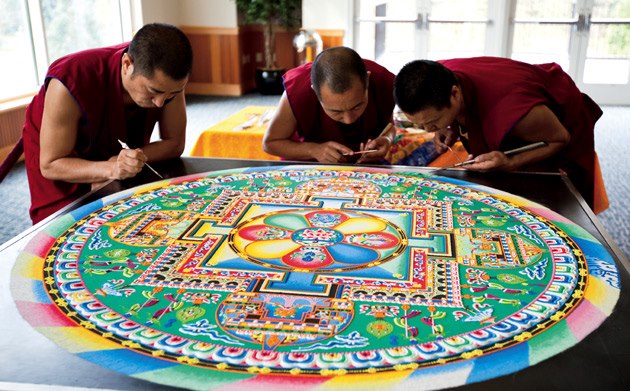 May 16-20, 2018
Join us for a series of events including meditation, an Interfaith discussion panel, lectures, a Tibetan Family Day and the artistic creation of a sand mandala. The team of monks may be observed in the process as they continue the ancient ritual of building the sand painting. Made of powdered and dyed stone, sand, dust, flowers, and charcoal, the sand mandala will require between 75 and 125 hours of effort, with several monks working at a time. The sand mandala may be viewed daily throughout the creation process from Wednesday morning through the closing ceremony on Sunday.

Friday, May 18
9:00 a.m. – 5:00 p.m. Public invited to view mandala and visit with the monks. Questions welcomed.
10:00-11:00 a.m. Meditation / Teaching: “Birth, Afterlife and Rebirth” ($10 suggested donation)
7:00 p.m. Interfaith Dialogue: “Finding Peace in Turbulent Times: Voices from Many Faiths”. Clergy of five faiths will discuss about working for justice and peace at this momentous time.

Sunday, May 20
9:00 a.m. and 11:00 a.m. Buddhist Meditation Worship Service
12:20 p.m. Dissolution Ceremony for the Sand Mandala and Mingling With The Monks over tea and cookies
1:00 p.m. Procession to Cardiff State Beach to disperse the sand in the ocean as a blessing
for world peace. Everyone welcome. (Paid parking in beach lot, free parking up the hill on the street.)

Purpose of the Tour
The purpose of the Phukhang tour is to share with all people the monks’ culture, as well as practices and paths to inner peace and compassion. Donations raised by past tours support much needed building improvements, medical needs, teachers’ salaries and the day to day expenses of supporting the khangtsen. The tour’s success is due to the help and generosity of those who support the tours.

Mandala means literally “that which extracts the essence.” There are many different types of mandalas used by Tibetan Buddhists. They can be created in either two or three dimensions. The ones on the monks’ tour will be two‑dimensional sand mandalas. These are without doubt the most creative, labor‑intensive, and concentration‑intensive of all mandalas created. They require between 75 and 125 hours of effort, completed by several monks at a time. 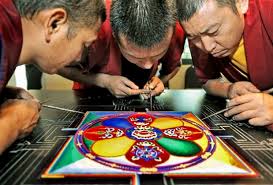 Each sand mandala represents the architectural layout of the entire palace of a specific deity. The Menla mandala, for example, represents the dwelling of the Medicine Buddha, who embodies the perfection of the physical and mental health of all beings. There are mufti‑layered symbolic images throughout the “palace,” where iconography, placement, and color all have significance. Additionally, to the learned Tibetan Buddhist monk, the mandala represents his vision of the entire universe. The mandala is normally used during the initiation of a monk into a high form of meditation. This sacred initiation is referred to as an empowerment ceremony. After the initiation, it requires years or possibly an entire lifetime of intense study and meditation under an experienced Lama to expose the depth and intricacy of the universe.

In the past, sand mandalas were made with the powdered results of the grinding of precious stones, such as turquoise, lapis lazuli, coral, powdered gold and silver, and many other cherished and priceless materials. Today, this is only done on very special and/or auspicious occasions. More commonly, the colors are made of powdered and dyed stone, sand, dust, flowers, and charcoal. The colors are chosen to match the color of one of the Buddhas of the five Buddha families.

The sand is applied very precisely by the gentle tapping of a sand‑filled metal cone that has had its tip removed. The Master must be the first to initiate the mandala, and does so by being the first to pour the sand.

The outline of the mandala is defined by the holding of a string that is dipped in chalk and then ‘snapped’ in the appropriate place.

Upon completion of the mandala, the monks will purposely destroy the magnificent work of art. The Buddha’s last words were “All things are impermanent, work out your salvation with diligence.” In upholding the principle that life is transient, the monks sweep up the mandala and place the sand in a river, lake, or ocean as an offering to purify the surrounding environment.

Gaden Shartse Monastic College is situated amid lush green hills and jungle in the remote countryside of southern India. It was founded in 1969 as an effort to re-establi 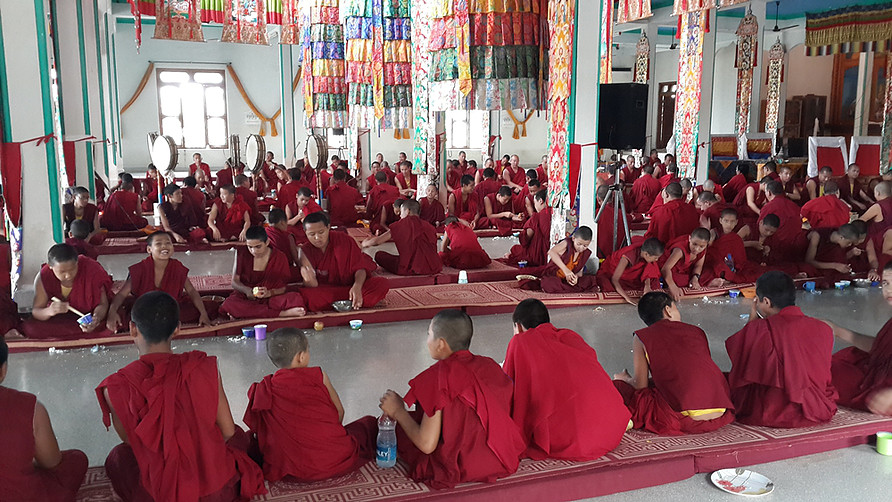 sh one of the great monastic traditions of Tibet. A small group of elder monks and fifteen young boys, all of whom had managed to escape the destruction in Tibet, settled on land given to them by the Indian government in Mundgod, Karnataka. Today the college is at the forefront of the revival of Tibetan Monastic education, with more than 1600 resident students, teachers, scholars, and spiritual practitioners. Due to the success of the academic program and the quality of the teachers at the monastery, Gaden Shartse has established a reputation as being the leader in the field of Buddhist and Tibetan studies.

By the beginning of the 7th century Tibet was filled with fragmented tribal, war‑loving people. When Tsong Tsen Gampo (617‑693AD) became the ruler of Tibet, he imported the philosophical tradition of Buddhism, which had been flourishing in India for centuries. His successor, Trisung Detsen, then made it the official religion. The once‑violent nation of Tibet became transformed by this new appreciation for the depth and true worth of human life. It was evolutionary. Tibet became one of the finest civilizations the world has ever seen. It became a nation of people filled with patience, tolerance, generosity, love for learning, and loving‑kindness. Monasteries and learning centers sprang up across the country, and the Buddhist values of compassion and wisdom infused the people of Tibet.

Sadly, this unique, one‑of‑a‑kind, beautiful civilization was destroyed in 1959 by the invasion of China. The Chinese Cultural Revolution took the lives of more than 1.2 million Tibetans between the years of 1959 and 1972. 6000 centers of Tibetan culture and religion were destroyed. As a result, Tibetans continue to this day to seek‑refuge across the globe.

An entire generation has now passed, and sadly the difficulties continue for the people of Tibet. Religious freedom is restrained under Chinese rule, and most of the sacred institutions have been destroyed or shut down. Families are separated as many seek refuge from the repression and occupation of Chinese rule. China uses Tibet’s high altitude for the storage and stockpiling of sensitive armaments, putting the lives of the Tibetan people (who do not believe in the weapons of war) at the highest risk, as well as that of the whole of the Asian continent.

There continues to be a massive population transfer into Tibet from mainland China, and even the Chinese are resentful as they are unable to acclimatize to the thin air at 15,000 feet. Bigotry and tension are tangible. The suffering thus continues — only this time, it is rarely heard about. As Tibetan elders, the last to remember the beauty and harmony of a civilization governed by wisdom and ruled by compassion, pass away, younger Tibetans watch their dreams of a revival of this culture slip away. The democratic exiled Tibetan government is located in Dharamsala, India. Maintaining their commitment of non‑violence, the government has trouble negotiating with the Chinese, who refuse to meet with the Dalai Lama. Recently, however, envoys have been received in China, and this is a positive step forward. Still Tibet has had no formal recognition from any government in the world. Tibet’s host, the Indian government, concerned about the reaction of their Chinese neighbors, discourages and dampens the effect of any political action taken by the exiles.

In order to support the exiled government’s efforts to preserve the cultural legacy of Tibet and its people, the last surviving members of Tibet’s former centers of learning have re‑established themselves in India. Focusing upon the survival of a culture and people who face extermination, these monasteries and institutions are the only hope for assuring the continuation of the teachings of this rare and valuable way of existence. One of the first such voluntary centers is the Gaden Shartse Monastic College, which was founded in a Tibetan agricultural settlement in South India.